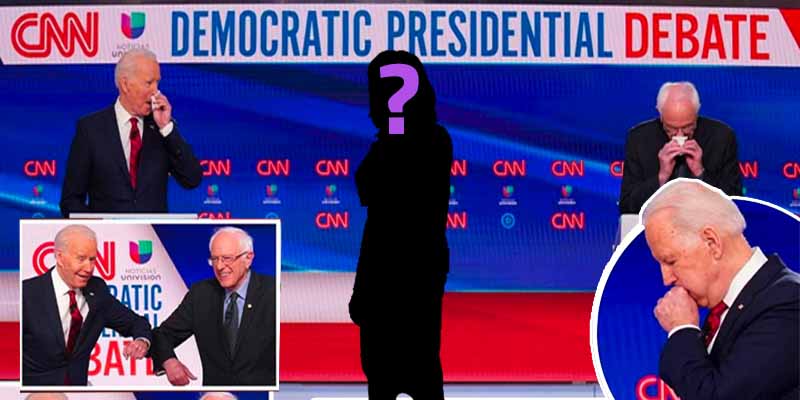 Biden, Bernie Favor Women For VP, But Who Will She Be?

But no backstabbing on Sunday, March 15—the “Ides of March”—and anyone who partook in the Biden vs. Bernie debate prop bets, or watched the brawl live, is probably wondering who won the debate.

Well, you’ll be happy to know the political prop bet for the Biden-Sanders debate winner/loser paid a “push” (all bets refunded) when CNN’s Chris Cillizza, my pizza pundit lizza from another mizza, shocked the world when he declared both of the over 70 geriatric candidates to be a “loser” of the debate.

But if the prop would have been “Will Amy Klobuchar be declared a winner?” then you can bet the political betting high rollers would’ve been all over those odds like eating buttery corn on the Klob.

Because that’s right, folks: Biden—the odds-on favorite for the Democratic nomination—”stole the show” for the pander-to-me-please pundits around the world by announcing he will name a woman as his Vice Presidential running mate.

But whoa, man—regardless of who Biden or Sanders name as VP, they need to learn some man-ners! Or at least ask to be excused from the debate corner so that you can blow your load of snot into a dapper handkerchief. Gentlemen, WE ARE LIVING IN A SOCIETY! So, act in a civilized way, please?

And don’t even get me started on Biden: Look, fa(c)t. Here’s the deal, the fact of the matter is people don’t need a revolution; they need a solution during crises like swine flu, SARS or Ebola.

Biden’s solution involves coughing malarkey juice directly into his hands while in the midst of a global pandemic, live on-air in front of tens of millions of people! And we know how handsy you’ve been in the past too. Say it ain’t so, Joe!

But sorry, Bernie bettors. It looks like the DNC is willing to sacrifice the boomers and elderly, who are most at risk from dying to COVID-19, by telling them to go vote in the March 17 primaries so the party establishment can carry a mentally declining Biden over the finish line.

However, despite the former VP’s nominee odds having a strong chance of paying out at this point, he’s going to need to stop being “full of shit” and both need to remember the name of the viral disease we’re trying to combat if Democrats are going to survive the Trump campaign ad onslaught. Here’s a quick preview of what’s to come.

In the #DemDebate, Joe Biden and Bernie Sanders:

✖️ Mixed up the coronavirus with Ebola – twice

✖️ Claimed we've been through the coronavirus before

✖️ Forgot the name of "what happened in Africa" (Ebola)

They aren't up for this. pic.twitter.com/28FyUQ7DMe

But you know what? Enough about the boys.

The girls are guaranteed to ride shotgun in 2020, and it’s starting to feel like the best hope for the first woman elected POTUS is for the eventual she-VP to take over as driver in 2024 or 2028.

After Biden’s pledged to pick a woman to get his old gig during the debate and Bernie’s 78 consecutive years as a feminist (likely a record for a white man) not being QUITE good enough for critics of the “crazy” Democratic socialist, women are heavily favored to get the Democrat’s ticket to ride in the presidential campaign car, according to the VP betting odds at Bovada sportsbook.

Let’s just hope the woman VP, whoever she be, whips the male nominee into shape and keeps him focused because Democrats have to keep their attention on the issues if they want any chance of beating Trump on Tuesday, November 3.

Quick Note: Pete Buttigieg or Julián Castro are the only men with a chance to be selected as Vice President, but there’s a strong chance the boys will have to kick it in the backseat for the foreseeable future.

Who Will Joe Biden Choose To Be His Vice Presidential Running Mate?

The VP odds for Kamala Harris indicate she’s the betting favorite to be selected as Joe Biden’s running mate for his 2020 Democratic presidential bid. The California senator is listed at +175, meaning a $100 bet wins $175 if she becomes Biden’s VP—giving her a roughly 30% chance.

Who Will Bernie Sanders Choose To Be His Vice Presidential Running Mate?

Bernie Sanders’ chances of winning the nomination are pretty slim after the establishment banded together before Super Tuesday to make sure the poor can’t have health care.

Nevertheless, 2018 Georgia gubernatorial runner-up Stacey Abrams is named the favorite to be Bernie’s pick for VP. Abrams is listed at +225 odds, meaning a $100 wager wins $225 if she’s the Vice President on the Sanders ticket. Based on the implied probability, she has a roughly 26% chance of becoming Bernie’s VP.

Which She For VP?

Honestly, it’s a pretty tough call. The oddsmakers’ opening line for VP is pretty on point after the Democratic debate, since both Kamala Harris and Stacey Abrams should be strongly considered to be Joe Biden and Biden Sanders’ 2020 Vice Presidential picks, respectively.

I made my thoughts known after the Biden-Bernie debate. This isn’t a prediction that Abrams will be the VP for either candidate, but it’s why she’d be the best choice for either of the two remaining Democratic contenders.

If I were them, I'd ask Stacey Abrams to be VP. She'd give either campaign a spark AND would be someone all Democrats get even more excited for in 2024/2028 🌊 https://t.co/BfqfAFMiUZ pic.twitter.com/Ugvc4T8PMO