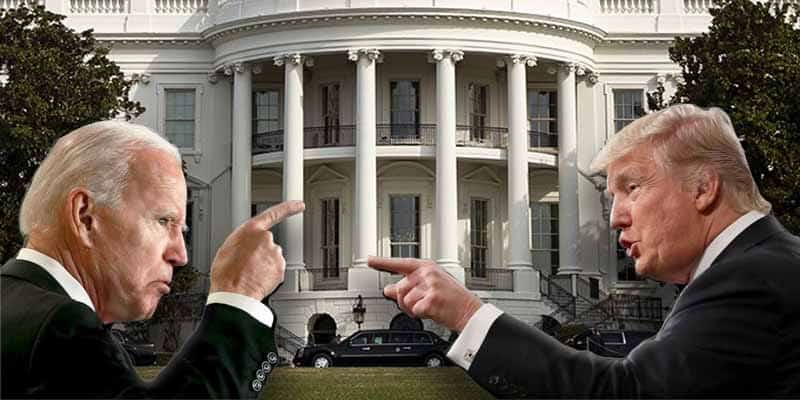 Who will be the next President of the United States?

Will America reelect number 45 or make a change by voting for number 46?

According to the early 2020 U.S. presidential election odds at Bovada sportsbook, the oddsmakers favor President Donald Trump to beat former Vice President Joe Biden in a potential matchup should both candidates go on to win their respective party nomination.

*Both must win the nomination for action

The early line indicates Trump’s reelection odds are favored at -160 (or 5/8), meaning a $1.60 bet on the Republican incumbent would win $1 if he earns a second term in the White House. Oddsmakers give Trump a 58.07% chance to win, based on the implied probability without juice.

There is a roughly “slim to none” chance that Trump won’t be on the general election ballot, based on the 2020 Republican nominee odds. With the impeachment trial now firmly in the past, the incumbent’s “Keep America Great” campaign can turn its attention to their likely opponent.

Biden’s betting odds open as the early underdog versus Trump should he manage to hold off Vermont Sen. Bernie Sanders and win Democratic nomination. Bovada lays you +120 odds (or 6/5), meaning a $1 bet would win $1.20 if Biden beats Trump — and pulls off the upset with a 41.93% implied probability — on November 3.

After winning ten state primaries on Super Tuesday, Biden is heavily favored to surpass 1,991 delegates and win the party’s presidential nomination, according to the 2020 Democratic nominee odds.

With both presidential candidates now likely to face off in the general election, how does a Biden vs. Trump matchup play out?

Trump is staking his reelection bid on the economy, which the Labor Department reported Friday that the U.S. economy added 273,000 new jobs in February, lowering the unemployment rate to 3.5% — a 50-year low.

However, the biggest threat to Trump’s second term is arguably not Biden, but the coronavirus and how his administration handles the outbreak in the United States.

While the job numbers are a positive sign for the President, Wall Street has taken a tumble, and as of March 6, fear of the coronavirus spreading from China has wiped a total of $9 trillion off global stock markets in only nine days.

A total of 14 people have died from roughly 225 cases in the United States. On Friday, Trump signed the $8.3 billion emergency spending bill passed by Congress to combat the coronavirus spreading across the country.

At this point in the race, the 2020 election odds may show “Trump vs. Biden” but make no mistake; it’s “Trump vs. coronavirus” until further notice.

On the flip side, Biden’s most significant challenge against Trump is holding it together mentally and finding some way to generate enthusiasm among younger voters, who have by in large not supported the former VP throughout the primary.

The former of the two is the biggest test, and there’s nothing to indicate 2020 Biden is going to return to his sharp self from 2012 or 2016.

And if you don’t think Trump is going to use Biden’s best gaffes against him, here’s a preview of what’s to come if they go head-to-head in the general election.

The following is the full political futures board at each of the top-rated online sportsbooks so you can shop for the best value for your bet ahead of the 2020 U.S. presidential election.