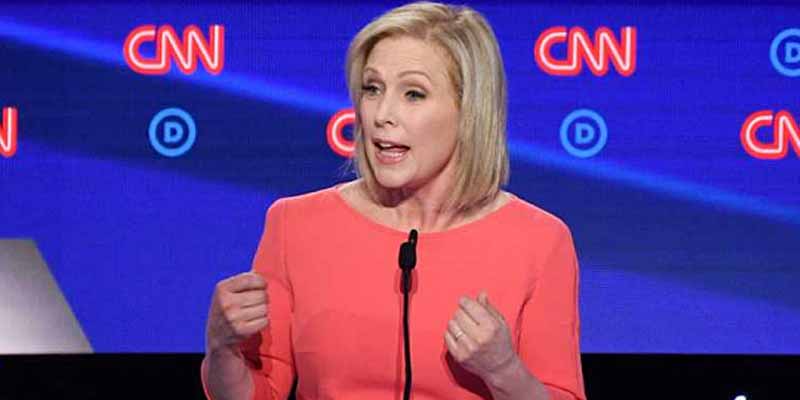 Trump Trolls Gillibrand, Democrats After She Drops Out Of The 2020 Race

Ultimately, it was brave of her to realize she had longshot odds, admit defeat and drop out of the 2020 presidential race.

“Today, I am ending my campaign for president,” the Albany native said on Twitter. “Now, let’s go beat Donald Trump and win back the Senate.”

Today, I am ending my campaign for president.

I am so proud of this team and all we've accomplished. But I think it’s important to know how you can best serve.

To our supporters: Thank you, from the bottom of my heart. Now, let's go beat Donald Trump and win back the Senate. pic.twitter.com/xM5NGfgFGT

Gillibrand, who only had +10000 odds to earn the Democratic nomination earlier this week, decided it was time to step down after not qualifying for the third Democratic debate in Houston, Texas.

President Donald Trump voiced his relief when he heard Gillibrand would no longer be in the presidential race. “She was the one I was really afraid of,” Trump tweeted Wednesday.

A sad day for the Democrats, Kirsten Gillibrand has dropped out of the Presidential Primary. I’m glad they never found out that she was the one I was really afraid of!

Candidates were required to earn 2% support in four qualifying polls and 130,000 unique donors. Only ten candidates were able to reach the threshold, all of whom have better odds to earn the Democratic nomination compared to Gillibrand:

Gillibrand, along with other Democratic candidates, complained that the requirements were too stringent.

According to Democratic strategist Jess Morales Rocketto, the high thresholds set by the Democratic National Committee “caused a seismic shift” in the 2020 race.

“I think [the DNC is] kind of like Thanos, snapping their finger and trying to get rid of half the field.”

Since the start of the Democratic debates in June, Gillibrand is the fifth candidate to leave the race. Before her, Rep. Seth Moulton was the latest to call it quits, following in the footsteps of Washington Gov. Jay Inslee, former Colorado Gov. John Hickenlooper, and Rep. Eric Swalwell.

With half the candidates missing the third debate, Gillibrand won’t be the only Democrat dropping within the next week or so. For now, here’s a list of the Democratic hopefuls seeking the party nomination in 2020.