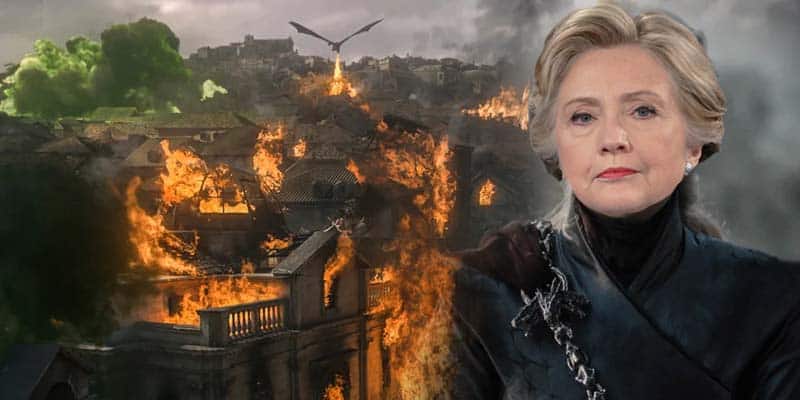 If you thought the final season of Game of Thrones was terrible, remember how it made no sense for Daenerys Targaryen to burn King’s Landing to the ground?

I mean, Daenerys spent the entire series getting to that point only for her to throw it all away just so the plot could have her go full “Mad Queen.”

And if I presented a similar real-life version of all that happening for the 2020 President Election and the odds for all candidates running this cycle, you’d probably pass on that, right?

Well, hopefully, 2016 runner-up Hillary Clinton stops taking phone calls from the Democrat mega-donors and carelessly floating the idea of a comeback because the last thing I want to say to you during this election cycle is, “Brace yourself: Clinton Is Coming.”

Clinton remains adamant that she won’t run in 2020, but she sure loves talking about how much “many, many, many people” want her to jump into the race.

“I, as I say, never, never, never say never, and I will certainly tell you I’m under enormous pressure from many, many, many people to think about it,” Clinton told BBC Radio earlier this week. “But as of this moment, sitting here in this studio talking to you, that is absolutely not in my plans.”

If it’s not in your plans, then why respond “Don’t tempt me” when Donald Trump tweeted probably the most blatantly obvious bait in the history of Twitter last month.

Don’t tempt me. Do your job.

If that wasn’t bad enough, the possibility of Clinton jumping into the race escalated when advisors close to her publicly stated she’s open to running in 2020.

Her posse made the rounds on cable news in an attempt at damage control following Clinton claiming Hawaii Rep. Tulsi Gabbard, a 2020 Democratic candidate, was a Russian asset and being groomed by the Republicans to run third-party.

It didn’t help matters when her spokesman Nick Merrill told CNN, “If the nesting doll fits” when asked if Gabbard was a Russian asset.

Side note: Before anyone says Clinton didn’t claim Gabbard, a woman of color and military veteran, was a Russian asset, look at her next statement from the podcast interview when she started trashing Jill Stein: “They have a bunch of sites and bots and other ways of supporting her so far. And, that’s assuming Jill Stein will give it up, which she might not because she’s also a Russian asset. Yeah, she’s a Russian asset.”

Why say “also” and “Yeah, she’s a Russian asset” if Stein was the only Russian asset? None of which has been backed up by a single shred of evidence.

Gabbard dared Clinton to jump in the race, and while she does receive decent odds to win the 2020 Democratic Nomination, her chances of beating Trump are a longshot, to say the least.

Regardless of whether the Russians won the 2016 election for Trump, Stein cost the Democrats the White House, or Gabbard somehow turns out to be a Russian asset that runs third-party, nothing would come close to Clinton entering the 2020 race and effectively burning America’s election process to the ground.

Isn’t it bad enough that Trump’s impeachment is sucking away valuable media time from the candidates and that the Senators running will likely be forced to halt campaigning right before Iowa to hear and vote during the trial?

Isn’t it bad enough that Michael Bloomberg and Deval Patrick, less than three months until Iowa, want to save the party from the vote of the working class in the hopes of an establishment victory?

It’s a fact that Trump’s 2020 Presidential Election Odds indicate he’s the favorite right now, but his chances at winning reelection can easily swing for or against him over the next year.

Make no mistake, everything I described above is essentially dowsing the 2020 Democratic campaigns—and all the hard work their teams have put in over several months—with fuel.

But Clinton entering the race now would unquestionably be the lit match that burns everything to the ground, and Trump would be a safe bet to laugh all the way to the White House yet again.