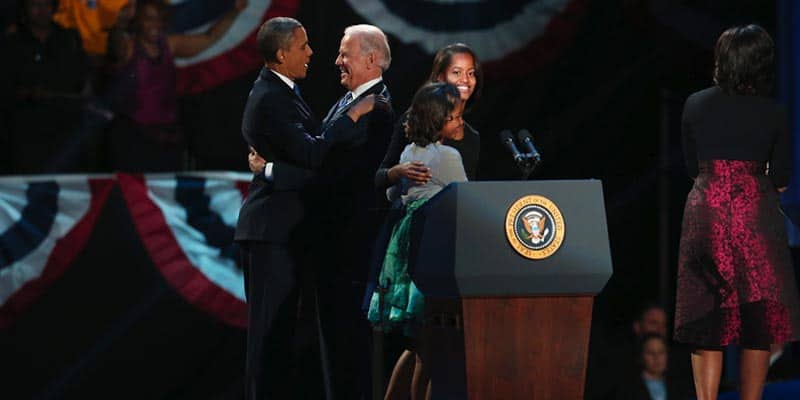 The 2020 Democratic Vice President betting odds will likely be determined soon since Biden desperately needs something to shift media attention on him.

The President’s daily two-hour coronavirus task force briefing and what Trump says or does during is getting most of the national spotlight due to the administration’s public commitment to being transparent about efforts to destroy the “invisible enemy.”

During the head-to-head debate vs. Bernie Sanders in mid-March, Biden committed to picking a woman as his VP running mate on the 2020 Democratic ticket. Since going back on his word and not picking a woman would be the end of Biden’s White House bid, oddsmakers unanimously favor the former VP to stay true to his commitment.

On 420 no less, Biden hinted he’d bet money on former first lady Michelle Obama’s VP odds and wouldn’t even think twice if he could pick anyone.

“I’d take her in a heartbeat,” Biden said in the interview with KDKA Pittsburgh. “She’s brilliant. She knows the way around. She is a really fine woman. The Obamas are great friends.” But presumptive Democratic nominee went on to say, “I don’t think she has any desire to live near the White House again.”

Valerie Jarrett, a former White House senior adviser and family confidant of the Obamas, said on Tuesday there is “no chance” that Michelle Obama will be Joe Biden’s Vice Presidential running mate.

“The reason why I’m being so unequivocal is that there just simply has never been a time when she’s expressed an interest in running for office,” Jarrett told The Hill. “She’s not demurring here. She’s not being hard to get. She doesn’t want the job.”

A $100 wager on Michelle Obama +1800 will win $1800 if the former FLOTUS accepts an offer as Joe Biden’s running mate for the 2020 presidential election. Her odds from the sportsbook implies there is only a 4 percent chance of Michelle Obama being named as the VP running mate.

Since Michelle is unlikely to be on the 2020 Democratic ticket, what are the chances that Joe Biden can rekindle his White House bromance with 44th President Barack Obama?

If FLOTUS is essential “no chance,” then the odds of the former POTUS taking a demotion, coming out of retirement, and painting Washington DC blue with his best mate are likely “one in a million.”

Nevertheless, the updated VP futures list Barack Obama +5000, meaning there’s a less than one percent chance Biden’s dream comes true. But if you believe Biden will bail on all women across America, then an example $100 bet would win a whopping $5000 if Barack becomes sidekick Robin to Biden’s Batman for the 2020 election.

With all that said, it’s reasonable to assume the Obama family would just like peace and quiet after eight years of living in the world’s most stressful household.

Most presidential families tend to settle down after their time in the Oval Office, and as much as pundits and cable news would love Michelle or Barack to jump back in the spotlight, odds favor that not happening anytime soon.

The former first lady may take a swing at the presidency in 2024, but talk of the next general election cycle is reserve for November 4, 2020.

For the record: The 22nd Amendment of the US Constitution does prevent Barack Obama or anyone who’s served two full four-year terms in the White House from running for President a third time.

However, an untested — but certain to be challenged if ever attempted — loophole in the language hypothetically allows an eight-year President to run as Vice President on the ticket an infinite number of times.

Then, theoretically, if a party’s nominee wins and steps down as President, there’s nothing preventing the VP (who has two terms as POTUS) from being sworn in as Commander-in-Chief.

All bets are off if that ever happens, but we’ll be sure to cover the political prop wagers for it if does.

For now, here’s an in-depth look into serving “three terms as President” by the LegalEagle YouTube channel. Immediately following are the complete list of odds on Biden’s pick for Vice President — which now shows one woman as a clear favorite.

In the interview KDKA Pittsburgh, Joe Biden also commented on the vetting process for picking his running mate for the 2020 election and where his campaign currently sits on making a selection for Vice President.

“In terms of who to pick, we’re just beginning the process.,” Biden said. “We’ll shortly name the committee to review this and begin to look through the backgrounds of the various potential nominees. And that’s just getting underway.”

BetOnline has a massive shift in the odds for the Democratic VP betting markets over the recent week as rumors have begun to ramp up regarding who Biden will select as his running mate.

As of April 22, the odds of Vice President Kamala Harris indicate the US Senator from California is the clear betting favorite by the online sportsbook, and no other candidate is remotely close.

Harris -150 now means that a $150 bet would win $100 if the former 2020 candidate accepts the VP offer from Biden or any other longshot last-minute swap for the Democratic nominee. Additionally, Harris has seen a noticeable increase in her chances over the last week when compared to other VP betting markets.

Given that any wager on her running mate chances has a 57 percent implied probability, it appears oddsmakers and bettors may already have a good idea of who the Democrats Vice Presidential running mate will be before Biden — especially when considering Kamala’s VP odds against the rest of the female-dominated field.