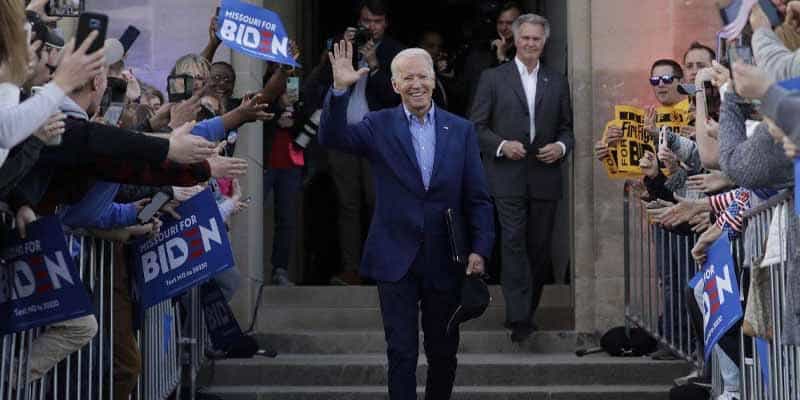 But it may not be much longer before one of the two crosses the finish line.

With Biden (664) holding a delegate lead over Sanders (573) after Super Tuesday and #Joementum on his side, the state-by-state betting odds for the March 10 primaries favor Biden winning all six contests tomorrow.

Six states will hold Democratic primaries on Tuesday, March 10. All eyes are on Michigan, which contains the most significant “Super Tuesday 2” delegate prize (125), followed by Washington (89), Missouri (68), Mississippi (36), Idaho (20) and North Dakota (14).

Biden won 10 of the 14 Super Tuesday states and pulled off upsets in Maine, Massachusetts, Minnesota, and Texas. Sanders managed to keep the pledged delegate count close with a convincing win in California.

However, Biden’s betting odds indicate there’s a strong possibility for a clean sweep of the March 10 primaries. If the former VP manages to win all six states on Tuesday, then he may put an end to Sanders’ chances of winning the nomination.

The following are the betting odds for the March 10 Democratic primaries, which also show the percentage chance to win each state based on the implied probability from the 2020 election futures at Bovada sportsbook.

Also included is the average polling margin from the forecast at FiveThirtyEight. Biden is currently polling higher in five of the six March 10 primary states while Sanders holds a half of a percentage point edge in Washington state.

Will Joe Biden Win The Nomination?

The 2020 Democratic nominee betting odds have drastically shifted in favor of Joe Biden following his big wins from Super Tuesday.

Biden is now listed at -800 (or 1/8) odds, meaning an $8 wager will win $1 if the former Vice President can hold off Sanders and win the nomination, which has an approximately 81% of happening.

Sanders, on the other hand, is a significant underdog before the March 10 primaries are held. At +650 (or 13/2) odds, a winning $1 bet pays out $6.50 and gives the Vermont senator a 12% implied probability to mount a comeback.

The 2020 Democratic presidential race is not over yet, but Biden has established himself as the clear betting favorite.