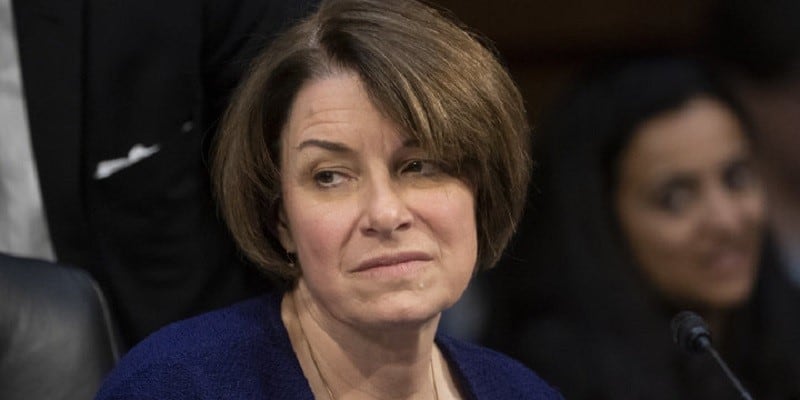 Minnesota is burnt to a crisp, and Amy Klobuchar is toast.

While the MN Senator has been trending near favorite status on the Joe Biden Vice President odds boards at most offshore sportsbooks, BetOnline yesterday removed their VP lines entirely, signaling a significant forthcoming shakeup. At the time of this writing, the site still hasn’t posted a new set of odds for the position.

At other sites like Bovada and MyBookie, Klobuchar is still in second place, though the gap between her and front-runner Kamala Harris (CA) is lengthening.

A week ago, and for the entire 2020 Presidential election cycle (at least after she dropped out of the main race), Klobuchar was baggage free, well-liked in the Rust Belt, and was considered by pundits to be Biden’s best chance at capturing or flipping valuable Midwestern swing states.

But after Biden’s racially charged flub on The Breakfast Club last Friday, there have been growing calls that not only must he make a female Vice President pick, but that pick must also be a woman of color.

This has kept Harris as the favorite despite her own questionable past as a California District Attorney and, later, as Attorney General in the State.

But now Klobuchar’s skeletons – fairly or unfairly, and skeletons or not – are coming out of the closet.

And one of those in particular has now logically disqualified her.

Yes, you can still wager on Klobuchar VP odds at the election betting sites above, but you shouldn’t.

With Minneapolis in shambles and a host of protests and riots picking up steam nationwide, what should have been a local issue about city management, policy, and criminal justice reform in Minneapolis has become a major mainstream flashpoint, and no politician – not even Donald Trump himself – is as imperiled by the developments as Sen. Klobuchar.

The now-former (but still not criminally charged) officer who was captured on camera smiling as he choked to death an already incapacitated George Floyd is one Derek Chauvin.

And after some digging, it turns out that Klobuchar, in her previous role as the head Hennepin County attorney, declined to prosecute Chauvin in a previous case where he shot to death an armed suspect in October 2006.

While that isolated case may have been – in the parlance of law enforcement – a “good shoot,” it turns out that Chauvin was later placed on leave after a less justifiable shooting of a Native American man in 2011. Though that latter event occurred after Klobuchar was elected to the US Senate in 2007, Chauvin had 10 official complaints of misconduct during his career, all culminating in the outrage currently engulfing America.

And that’s not all.

“declined to bring charges in more than two dozen cases in which people were killed in encounters with police…[while she] aggressively prosecuted smaller offenses [that] have been criticized for their disproportionate effect on poor and minority communities.”

This is the end, folks. There’s no way around it.

Right now, there is no more toxic possible VP candidate for Joe Biden than Klobuchar, and while Dementia Joe might be losing his mind, he’s not remotely too far gone to see the writing on the wall.

For the Biden campaign, of course, this could be a good thing. After the Breakfast Club fiasco, he was already being put into a corner where a black female would have to be the popular pick, and this takes the only credible white VP candidate out of the picture.

Short term, that’s a political win, because it makes a difficult selection much, much easier.

Long term, when it comes to the Joe Biden odds to actually win the presidency in November, the ramifications are more difficult to sort out.

As stated, Harris’ prosecutorial record with minorities – particularly African Americans – is less than stellar. Jailing marijuana users for years while laughing publicly about how she herself smokes is a damning thing and would get top billing in every Trump ad from now to election night.

Plus, Harris would only help Biden swing California for the Democrats – which is something he needs zero help with. The state’s a blue lock, and no matter which candidate Biden chooses for the bottom of the ticket, California is already his.

Though there are still several compelling choices left on the boards, if you’re seasoned in political betting, you’ve already narrowed the VP odds down to a woman of color.

Right now, that leaves the following candidates in the mix (excluding Gabbard, who remains persona non grata for the DNC):

Of course, just because these are the candidates listed on all the offshore election betting sites doesn’t mean that they’re the only ones up for consideration.

Biden could surprise everyone with an off-the-radar selection, but these odds show the potential picks that American bettors – and by extension, American voters – believe have the best shot to take the bottom half of the Biden ticket.

Right now, if we had to bet (and we do!), our money is on Val Demings. At +900 odds, the payout is exceptional, and Demings – as a US House rep from Florida – could give Biden the Sunshine State.

And if Creepy Joe can swing FL from the GOP, the Democrats won’t be riding off into the sunset – they’ll be Ridin’ with Biden all the way to the White House.