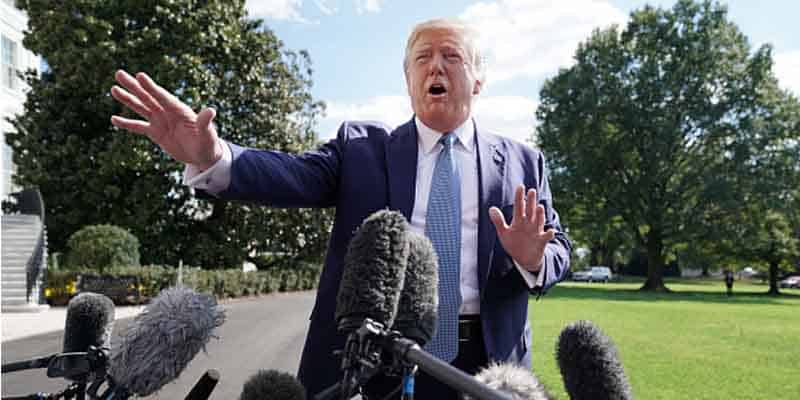 Another whistle is about to be blown.

The impeachment inquiry into President Donald Trump’s dealing with Ukranian President Volodymyr Zelensky was originally launched on September 24 after a whistleblower’s complaint was filed in August.

Over the last couple of weeks, Trump has decried the complaint, claiming that the whistleblower is using secondhand information and that the phone call with Zelesnky was “perfect.”

….In addition, I want to meet not only my accuser, who presented SECOND & THIRD HAND INFORMATION, but also the person who illegally gave this information, which was largely incorrect, to the “Whistleblower.” Was this person SPYING on the U.S. President? Big Consequences!

But over the weekend, news broke that more whistleblowers would be stepping forward, confirmed by the legal team representing them.

Mark Zaid, a member of the firm, told ABC News that the second whistleblower is a member of the intelligence community with firsthand knowledge of the allegations against Trump.

Another member of the firm, Andrew Bakaj, confirmed this information on Twitter.

“I can confirm that my firm and my team represent multiple whistleblowers,” Bakaj tweeted early Sunday morning.

IC WHISTLEBLOWER UPDATE: I can confirm that my firm and my team represent multiple whistleblowers in connection to the underlying August 12, 2019, disclosure to the Intelligence Community Inspector General. No further comment at this time. https://t.co/05b5aAVm2G

It’s unclear exactly how many “multiple” whistleblowers there are now, but at least two have been confirmed by the firm.

Trump is not taking the news of a new whistleblower lightly, although he has already publicly denounced them. Tweeting this morning, Trump again said that his call with Zelensky was perfect without any pressure.

“Bring in another whistleblower from the bench!” Trump finished.

“IG: DECLASSIFIED INFORMATION CONTRADICTS THE WHISTLEBLOWER.” @foxandfriends But why are people surprised? The “partisan” Whistleblower was very wrong on what was said on my perfect, “no pressure,” call with the Ukrainian President. Bring in another Whistleblower from the bench!

Not only has Trump criticized the new whistleblower on Twitter, but he has also called for the impeachments of House Speaker Nancy Pelosi and House Intelligence Committee Chair Adam Schiff.

Nancy Pelosi knew of all of the many Shifty Adam Schiff lies and massive frauds perpetrated upon Congress and the American people, in the form of a fraudulent speech knowingly delivered as a ruthless con, and the illegal meetings with a highly partisan “Whistleblower” & lawyer…

….This makes Nervous Nancy every bit as guilty as Liddle’ Adam Schiff for High Crimes and Misdemeanors, and even Treason. I guess that means that they, along with all of those that evilly “Colluded” with them, must all be immediately Impeached!

The President also alluded to the impeachment of Utah Senator Mitt Romney, although Romney could only be expelled, not impeachment, according to Article 1, Section 5 of the United States Constitution.

Until the second whistleblower reveals any new information they may have, the impeachment inquiry will likely remain a battle of tweets and subpoenas.