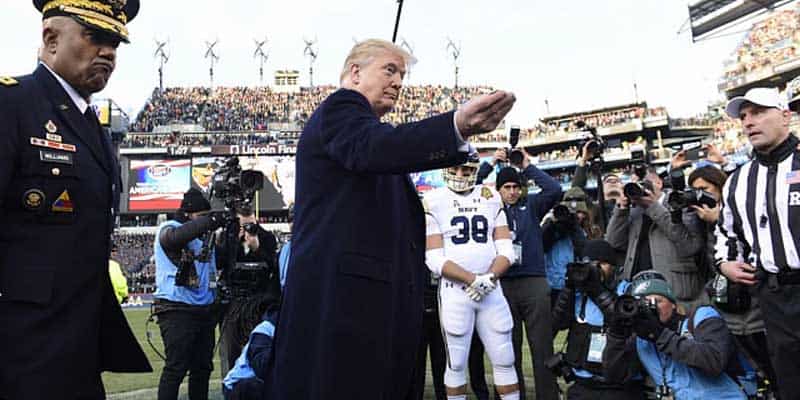 America’s Game, the college football showdown between the Navy Midshipmen and Army Black Knights, will play its 120th game since 1890 this Saturday.

Normally attended by sitting United States Presidents, current POTUS Donald Trump could be preoccupied this weekend given the House Judiciary Committee’s approval of the articles of impeachment.

Based on the information White House officials gave Military Times on Monday, the Commander in Chief will be in attendance for the 2019 matchup. This was, however, before the announcement that the articles of impeachment charges were moving to a House vote.

Earlier today, the Judiciary Committee approved the articles of impeachment against Trump, charging that the President abused his power and obstructed Congress.

Following the vote, Judiciary Committee Chairman Jerry Nadler said the House will move quickly with the rest of the impeachment proceedings.

“Today is a solemn and sad day,” Nadler said. “For the third time in a little over a century and a half, the House Judiciary Committee has voted articles of impeachment against the President for abuse of power and obstruction of Congress. The House will act expeditiously.”

The full House vote in expected on Wednesday of next week.

Trump, reacting to the news, tweeted that he has done nothing wrong before calling the entire ordeal “crazy.”

How do you get Impeached when you have done NOTHING wrong (a perfect call), have created the best economy in the history of our Country, rebuilt our Military, fixed the V.A. (Choice!), cut Taxes & Regs, protected your 2nd A, created Jobs, Jobs, Jobs, and soooo much more? Crazy!

Only two other Presidents have ever been impeached– Andrew Johnson in 1868 and Bill Clinton in 1998– although neither was removed from office by the Senate. If the odds on BetOnline hold up, Trump will continue the same trend.

Will Donald Trump be removed from office?

Converted to percentages, Trump has an 88.01% chance of remaining in the White House until the 2020 election.