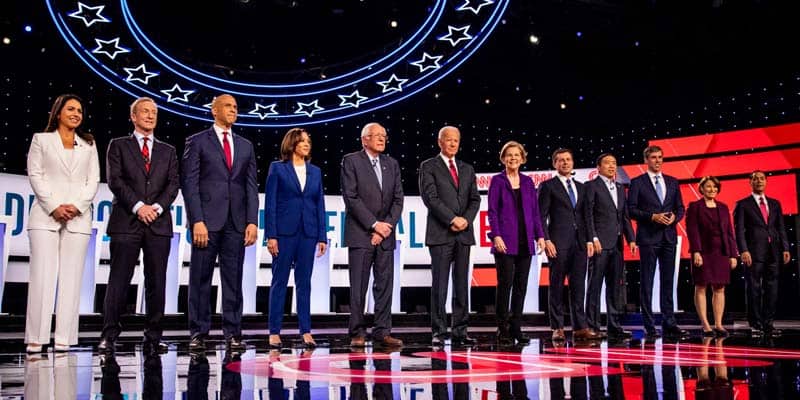 The fourth debate is in the books, and the new odds to win the 2020 Democratic Nomination have just been released.

If you looked closely last night, you might have seen more than a few of Mario Kart’s blue shells thrown at the candidate winning the race up until this point.

Massachusetts Senator Elizabeth Warren entered last night as the Democratic favorite, and although she’s slipped ever so slightly, she still remains the clear frontrunner after leaving Ohio.

Warren’s odds of winning the primary are now an even +100 after being listed at -120 odds before the debate. When converted to an implied probability, we can see her chances fell from 54.55% to 50%.

The public betting market could cause a further decline depending on how the post-debate polling data see Warren once the poll information begins to trickle out. For now, she remains the clear favorite to become the Democratic nominee.

However, betting against Warren is now more favorable, with “Not Elizabeth Warren” listed at -140 odds, 58.33% chance, which is up from the previous -120 odds.

Former Vice President Joe Biden’s odds and New York entrepreneur Andrew Yang’s chances remain in the second and third positions, respectively, and both saw no change on the board following Tuesday’s debate.

Sanders’ odds likely got a boost after he showed he was in good health and arguably one of—if not—the most energetic candidates on the Ohio stage.

Likewise, the odds for Buttigieg saw an increase after perhaps his best debate performance, which saw him effectively put a dagger into the campaign of Beto O’Rourke, who was one of the biggest losers on the board, falling to last place.

California Senator Kamala Harris took a major hit again after the debate. Previously, she was listed at +1400 odds, 6.67% chance, but after last night’s performance, the betting market lost even more confidence in her.

The Democratic favorite at the beginning of the year now has +2000 odds, 4.76% chance, to be the party’s nominee.

Perhaps the biggest takeaway from the debate may be that the oddsmakers believe it’s the end of the road for former Housing Secretary Julián Castro.

Castro already had longshot odds before the debate at +8000, 1.23% chance, but his name has been removed from the board entirely.

After some entertaining prop bets from the October debate, we can’t wait to see what the political betting sites have in store for the November debate when the field shrinks due to higher threshold requirements from the Democratic National Committee.

Below you can find the odds for all the candidates seeking to win the Democratic nomination. Their chances before last night’s debate are displayed in parentheses.