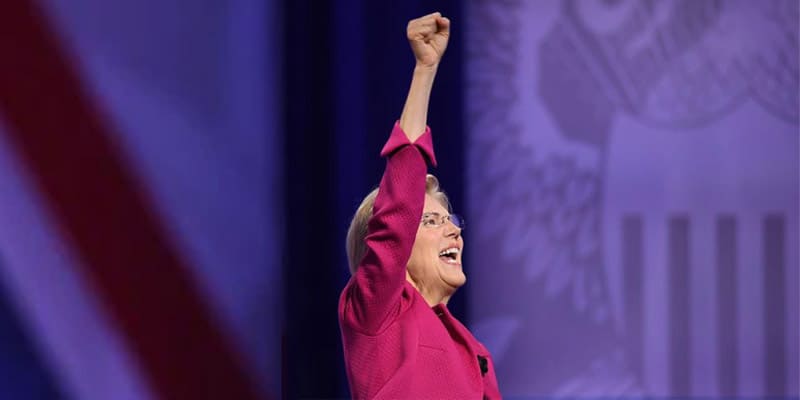 It’s starting to get lonely at the top, according to the current odds to win the 2020 Democratic Nomination.

Massachusetts Sen. Elizabeth Warren leads all candidates and has the best chance of becoming the party’s nominee prior to tonight’s fourth debate—and October debate prop bets are also now available.

Warren’s nomination odds are current at -120, which indicates the oddsmakers give her approximately a 54.55% chance of becoming the Democratic nominee for the general election.

However, a big target will likely be on Warren’s back tonight with it becoming clearer that she’s the frontrunner. When you’re leading the race, you have to watch out for those blue shells, and you can bet that the other Democrats are preparing to knock her off the top spot.

After all, she’s definitively the heavy favorite—having over a 50% chance—which is likely a result of Warren’s strong polling lately and the sharp decline of former Vice President Joe Biden.

Biden’s chances—which currently rest at +450 odds, 18.18% implied probability—have taken a bit of a hit ever since his son, Hunter Biden, was connected to the Ukraine scandal, which also resulted in the odds now favoring President Donald Trump’s impeachment.

In the third position on the board is the odds for Andrew Yang, who continues to increase steadily and is currently listed at +700 odds, 12.50% chance, to become the Democrat nominee after the New York entrepreneur started the year with virtually “no chance” to win.

Vermont Senator Bernie Sanders’ odds have dipped quite a bit following the previous debate, coming in at +1000, 9.09% chance. After needing a cough drop in Houston and recent news of his heart attack, the political betting market may react in a positive manner if he sprints out, pulls off a triple salchow, and has a big night on the stage tonight.

South Bend Mayor Pete Buttigieg rounds out the top five and is tied with Sanders at +1000. Mayor Pete’s odds have fluctuated since he became a top contender back in April, but he’s one of only a couple of candidates that have stayed in or near the top five since the very first debate.

The remaining candidates have some serious ground to make up and will need to make a splash on the stage tonight.

California Senator Kamala Harris has seen her odds in decline ever since the second debate, where Rep. Tulsi Gabbard—who missed the third debate, made the fourth debate, considered a boycott, but ultimately decided to attend tonight’s debate—called out her record, causing the betting public to lose pretty much all hope in Harris.

Billionaire activist Tom Steyer is making his first appearance on the debate stage tonight after joining late into the race back in July.

Some pundits say Steyer bought his way into the debate, and considering he’s spent $20 million on TV ads for only $2 million in donations—while saying he plans to spend around $100 million on his 2020 campaign—it’s pretty hard to dispute claims that Steyer is attempting to buy political power.

The vital swing state debate, which will take place at Otterbein University in Westerville, Ohio, is hosted by CNN and The New York Times and begins at 8:00 p.m. ET.

Below you can find the complete list of the current Democratic nominee odds, including what each candidates’ chances were prior to the Houston Debate in September (in parenthesis).