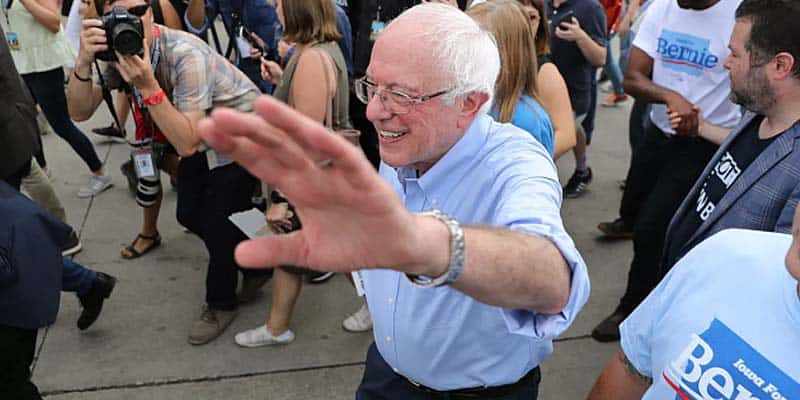 There is now only a month and some change until the 2020 Iowa Democratic caucus on February 3. For the past couple of months now, South Bend Mayor Pete Buttigieg has had a hold on the state.

But as the vote inches closer every day, Sen. Bernie Sanders’s political betting odds of winning Iowa are creeping up on Buttigieg. According to oddsmakers at Bookmaker, Mayor Pete has +154 chances of taking the first primary of 2020.

Sanders has +160 odds for the same thing.

Sanders, who barely lost Iowa’s Democratic caucus to eventual party nominee Hillary Clinton in 2016, has been surging in the last few weeks of 2019. Not only is Sanders gaining on Buttigieg in Iowa, but the Vermont senator is the favorite to win the New Hampshire primary on February 11 at -145 odds. Buttigieg is second with +255 odds.

While Buttigieg and Biden have steadily remained atop the Iowa primary and nomination odds, respectively, they are also stagnant. Sanders, on the other hand, is rising in the numbers. If nothing else, Sanders is generating a buzz that could be on the minds of voters come election time.

Earlier this year, Sanders’s shot at the Democratic nomination was written off by many insiders. The democratic socialist was simply seen as a leftist candidate with a strong group of supporters but a narrow base that could not help him win the primary.

“But in the past few weeks, something has changed,” Holly Otterbein and David Siders write at Politico. “In private conversations and on social media, Democratic officials, political operatives, and pundits are reconsidering Sanders’ chances.”

Buttigieg, conversely, is dealing with his lack of black voters while Biden is constantly confusing the public with his speeches and references.

Nevertheless, Biden leads all Democratic candidates in terms of 2020 party nomination odds with +205 chances of battling President Donald Trump for the White House. Sanders has the second-best odds at +423, followed by Sen. Elizabeth Warren (+478) and Buttigieg (+575).