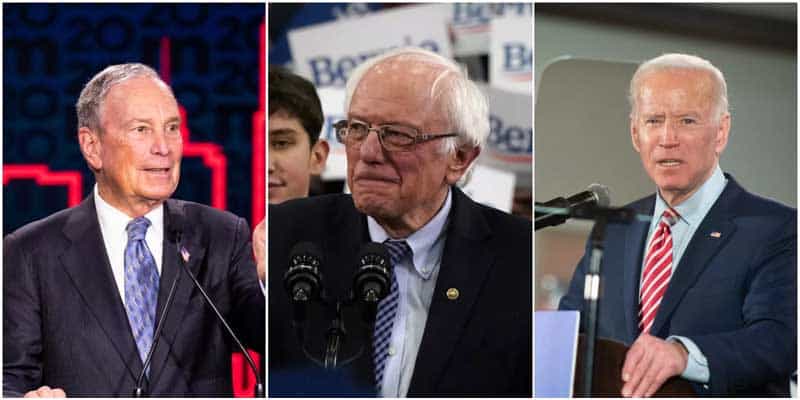 The 2020 Democratic presidential nominee odds and what each candidates’ chances are will begin to paint a clearer picture once the dust settles from Super Tuesday.

A total of 1,344 pledged delegates will be awarded on Tues., Mar. 3, and the current betting odds for Super Tuesday favor Bernie Sanders winning a majority of the states’ primary elections next week.

Sanders was the betting favorite to win 12 of the 14 Super Tuesday states earlier this week. Although Sanders’ chances have slipped for the Minnesota primary — Amy Klobuchar is now slightly favored to defend her home turf — the Vermont senator is still projected to win 11 states as well as the American Samoa caucuses and the Democrats Aboard primary.

However, there is one more early state primary before Super Tuesday, and the odds to win the South Carolina Primary heavily favor Joe Biden before voters cast their ballot on Sat., Feb. 29.

After opening as a slight underdog to Bernie Sanders, the betting public has pounded Biden to win South Carolina. Currently, the former Vice President is listed at -1300 odds, meaning a $13 bet would receive $1, and oddsmakers give the wager a roughly 85% chance to payout.

Tomorrow’s South Carolina primary results could have a significant impact on voters in Super Tuesday states. A big win for Biden means his campaign may be able to mount a comeback while a close contest or an upset for Sanders would likely put his campaign on cruise control for the nomination.

With their political betting futures already receiving action, the oddsmakers at BetOnline sportsbook have released prop bets for the over/under total number of delegates each candidate will win on Super Tuesday.

Sanders is projected to receive nearly twice as many Super Tuesday delegates as any other Democratic presidential candidate with his over/under set at 582 delegates. The odds for Sanders favor him finishing under that mark.

Coming in second is the betting odds for Biden, and the former VP’s over/under is listed at 310 delegates with the over favored.

Former New York City Mayor Michael Bloomberg will finally be making is first official ballot appearance on Super Tuesday, and the over/under has been set at 210 delegates. However, Bloomberg’s odds heavily favor a bet on the under winning.

Who Will Win The Super Tuesday Minnesota Primary?