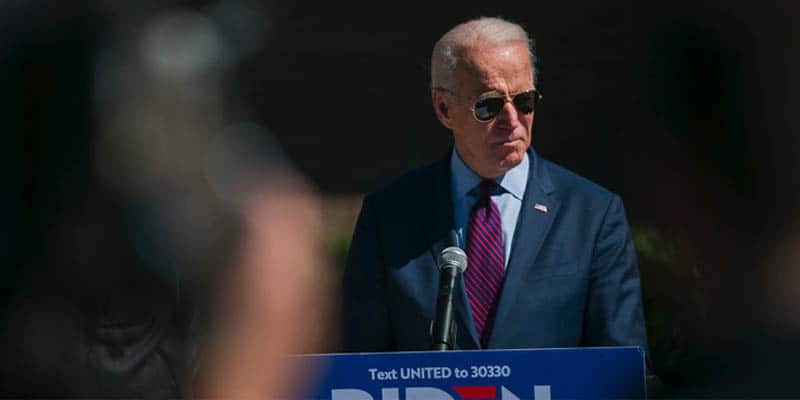 With close to seven months to go until Americans vote for President of the United States, oddsmakers and bettors continue favoring Donald Trump to defeat Joe Biden in the 2020 General Election and win a second term in the White House on Tuesday, November 3.

According to BetOnline Sportsbook, the latest odds of winning 2020 US Presidential Election favor Donald Trump -110 to win a second term — giving the Republican incumbent a 53 percent implied probability.

However, Joe Biden’s odds are unanimously listed as the underdog for the 2020 general election matchup versus President Trump, based on the political betting sites and prediction markets we’ve tracked for the head-to-head.

BetOnline’s betting odds for politics were updated Tuesday, April 21, to show the previous “even” money line for the former Vice President is now listed at +125, meaning Biden is currently given a 46% chance to beat Trump — mirroring Bovada’s futures.

Even traders at PredictIt, the popular political prediction exchange market, also currently favor Trump to beat Biden in the 2020 President Election at 51 cents to 44 cents, respectively.

Joe Biden, presumptive 2020 Democratic presidential nominee, received a slew of public endorsements recently from former 2020 candidates, like Sen. Bernie Sanders and Sen. Elizabeth Warren, and even his best bro, President Barack Obama, whom he served under as Vice President for eight years (2009-2017).

Related: Who will be “Biden’s Biden” for Democrats? See the betting odds on Biden’s VP pick from the top sportsbooks in Las Vegas and around the world.

Unfortunately, BetOnline’s oddsmakers don’t see the Democratic Party’s current choice working out against President Donald Trump, who is the uncontested Republican Party nominee due to his incumbency status.

The political betting site has released new 2020 General Election prop bets, which include the odds of Trump, Biden, or any surprise late entry receiving the majority 270 electoral votes needed to be elected President of the United States this fall.

Trump vs. Biden, with no longshots considered, is heavily tilted toward the incumbent based on the gambling action so far at BetOnline.

However, in an unlikely hypothetical scenario, the oddsmakers also give an even 50-50 percent chance to Trump -110 vs. The Field -110 — indicating the 2020 presidential election matchup becomes a coin flip if Democrats bail on Biden.

And what if Biden was swapped out? More on that below.

Trump vs. Biden: Who Will Win The 2020 Electoral College?

Trump vs. Field: Who Will Win The 2020 Electoral College?

Biden vs. Field: Who Will Win The 2020 Electoral College?

If Joe Biden could be replaced and Democrats run another nominee, oddsmakers predict “Vote Blue No Matter Who” would be favored to win essential swing states that cost Hillary Clinton the presidency in the 2016 general election.

It’s surprising to see unanimous agreement from sportsbooks and betting markets in April, prior to an election, that Democrats should consider ditching their current selection if the party doesn’t want a repeat of Donald Trump’s historic upset on November 8, 2016.

Based on the 2020 election state betting props from BetOnline, here’s which party the sportsbook predicts will receive electoral votes in crucial swing states and other close contests projected on November 3.

BetOnline projects the Democratic presidential nominee will win 9 of the 15 swing states and potential up-for-grabs contests. In contrast, the nominee for the GOP, likely Trump, is favored in 6 of the 15 general election states.

Before betting on any of the 2020 Electoral College props below, remember right after 2016 loss, the Democrats circled Michigan, Pennslyvania, and Wisconsin on the calendar as must-win states — the three states they neglected four years ago and need in 2020 if they want any chance to beat Trump in 2020.

With the betting odds against the majority 270 electoral votes going to Trump if Democrats make a change, it’s still unlikely the party stops riding with Biden — especially after the endorsements from Obama and other leaders in the party.

And if Democrats don’t bail on Biden, then Trump is the unanimous favorite to win reelection across all top online sportsbooks and betting markets as of April 21, 2020.

But if you disagree, stop 420 blazing it and then reassess your betting picks after watching Trump’s last attack ad on Biden.