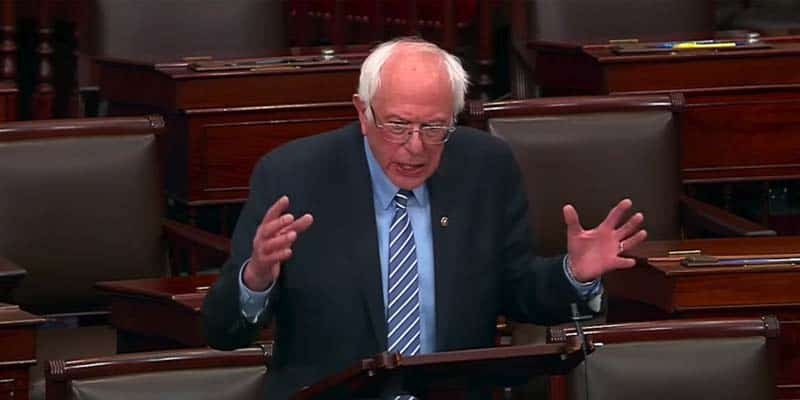 America supposedly loves an underdog, but voters have continued backing “perceived favorites” for President during a declared national emergency.

Like percentage growth for the US spread rate of COVID-19, it’s hard for our human brains to accurately “see” the odds of something happening, which is common when learning how to bet on presidential elections, sports (whenever play resumes), or anything with “uncertain outcomes.”

Any oddsmaker from the best political betting sites and likely all professional handicappers will tell you that betting on a favorite will net a loss in profits every time.

After all: “The house always wins” is an old saying for a reason.

Bernie Sanders’ odds of winning the 2020 presidential election (+2000, ~4% implied probability) are among the lowest ever recorded at the Bovada sportsbook.

Even though it’s unlikely to happen, current events prove why he’s the country’s most logical choice to help solve the biggest challenges facing America today — perhaps even more for the most vulnerable in society, since the literal stakes placed on individuals have arguably never been higher.

Why Bernie Is The Best Bet For America

On January 1, 2019, Sanders’ chances of becoming the 46th President of the United States (+1400, ~6% implied probability) were better than his current political betting futures on April 3, 2020 — exactly seven months until the general election is held on November 3.

After receiving the most votes in the Iowa Caucus disaster on February 3 (yet another sign of a series of unfortunate things yet to come), Bovada’s Democratic nominee odds installed the US senator from Vermont as the new favorite to win the nomination.

Leading up to the early primary contests, Bernie Sanders had not only closed the gap versus Donald Trump, but oddsmakers viewed a “Bernie vs. Trump” head-to-head (Sanders -120, Trump -120) as a 50% vs. 50% coin flip, according to the potential 2020 election matchup betting odds from mid-January.

For traditional sports betting example, if Bernie vs. Trump had a point spread for electorate votes, then oddsmakers would’ve made the matchup a “pick ’em” with “EVEN” odds for both sides.

Interestingly, Andrew Yang (with his “longer than long shot” odds status well behind him as a top 10 contender) was the only Democrat outright favored over the sitting Republican President (Yang -150, Trump +110) in the same batch of potential presidential betting propositions.

If Not Bernie, Trump Win Is Very Likely

Outside of Bernie Sanders and Andrew Yang, who dropped out after the New Hampshire primary, Joe Biden (Trump -150, Biden +110) and every other presidential candidate from Democrats (GOP and Independent candidates too, for the record) was projected to open as an underdog to Donald Trump for the 2020 presidential election.

Oddsmakers have already mathematically determined the “best” answer to the Democratic Party electorate’s top voting issue: “Who is most electable on the general election ballot?” aka “Who can beat Donald Trump on November 3?”

Despite this, Joe Biden’s odds currently make him the clear Democratic favorite. The former Vice President was given the “keys to success” before the South Carolina primary and has continued to crank out massive advantages by winning a majority of voters age 45 and up (especially in the urban and suburban communities), which accounted for 60-70% of the total turnout for the March 17 elections.

With the Democratic primary on pause and even the national convention delayed until mid-August, the current pledged delegate count shows Biden leading Sanders by more than 300 delegates (1,991 are needed to clinch the nomination).

Biden even briefly became the presidential favorite over Trump in mid-March, but political bettors recently began jumping out of the car — and that was before he gave additional cringe online interviews and was accused of rape.

Needless to say, the establishment is panicking out loud to political insiders and pundits. If you think fortune favors fools, then congrats: You’re one of the clowns betting on Andrew Cuomo’s odds of becoming President while the New York governor’s state COVID-19 death toll surpasses 9/11.

Feel free to gift our #Cuomo art to voters/bettors/traders hoping he becomes the next president. 🤡

If #Democrats pull a last-minute switcheroo, the primary is officially a pointless circus since a bunch of clowns can just decide who drives the car off a cliff on Nov 3. 🎪🚗🇺🇸 pic.twitter.com/GYpFrcwb13

If bailing on Biden is now an option, why don’t Democrat voters consider nominating America’s most popular US senator currently sitting in Congress?

But wait, this isn’t a popularity contest and sounding like a corporate shilling cable news pundit is not acceptable here at President Election Odds.

Among Democrats, here’s where Sanders ranks for the following:

The divide may still be across party lines, but what issue isn’t in 2020?

So far, the majority of non-infected members of Congress had no problem voting in favor of giving trillions of dollars to corporations using national emergency taxpayer bailouts so far (Some things never change, I suppose).

With no time to discuss corporate welfare socialism during an economic crisis that could be worse than the Great Depression, several politicians on both sides have fought vigorously against giving a single penny to the working people or the poor. Thank God

A bet on President Bernie Sanders most likely won’t win. But does an underdog have to be relentlessly and ruthlessly attacked when he’s never bitten anyone and just wants all Americans to have health care and fundamental means of living?

One glance through the hate and vitriol being slung by the worst of pundits and you’d think the 78-year-old feminist and human rights supporter would be the candidate who has numerous women making sexual assault allegations against him.

Unfortunately, US presidential election history has proven that bad characteristics (like rape) are more “qualifying” than “disqualifying” to the shock of probably no one.

Maybe it falls on us, the American voter, to be better then? Or maybe United States politics wouldn’t be such a pile of shit if “WE THE PEOPLE” stopped pooping turds in office and positions of power so that they can sell out and profit?

Call me “crazy” if you want, but Bernie Sanders should be the logical choice for most voters when they cast their ballot for TBD Democratic primaries and eventually for President on November 3 — unless the coronavirus pandemic turns to anarchy (not likely, thankfully).

If watching and listening to Sen. Sanders still up for the most in need during this time of crisis isn’t enough for you, then feel free to go to “the YouTube” and try to find something in his 40+ years in politics that fell on the wrong side of history.

It’s a pretty safe bet to say that you won’t even bother to look. However, I’m betting you couldn’t find anything remotely appalling about Sanders’ policy stances even if you used every available resource in the world — and that includes your brain, heart, and time.