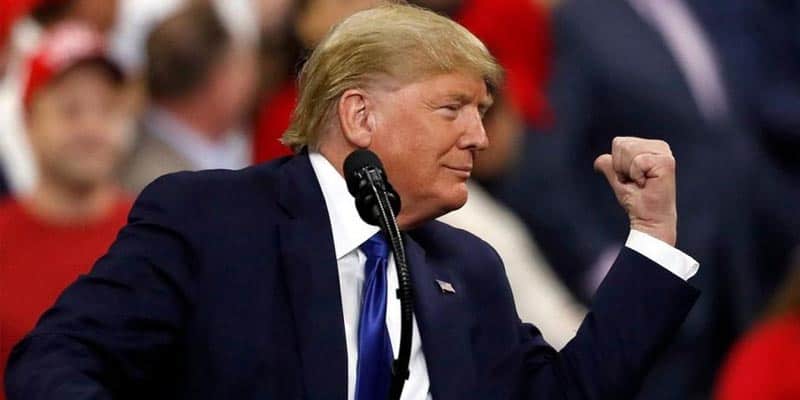 In a year that’s certain to be filled with uncertainty, the 2020 presidential election betting market has made one thing abundantly clear.

You can’t stump the Trump.

At least that is—in essence—what people “putting money where their mouth is” think when real money is wagered on President Donald Trump’s reelection odds at political betting sites.

Public bettors appear to be losing confidence with Democrats’ current strategy, whether it’s impeaching him or beating him on Nov. 3, 2020. And last night’s poorly moderated Democratic primary debate coupled with the articles of impeachment being sent to the Senate today has caused a spike in Trump’s chances of winning a second term.

According to the oddsmakers at Bovada Sportsbook, Trump has remained the odds-on favorite since the beginning of the primary election cycle. Here’s a look back at the start of 2019 to see how Trump’s chances of winning a second term have performed.

Will Trump Be Reelected Odds

Trump is now listed at -135 odds ($135 bet wins $100) to win the 2020 presidential election. When converted to an implied probability, his odds indicate that there’s a 57.45% chance Trump will be reelected—an all-time high for any candidate running this cycle.

The House of Representatives approved a resolution Wednesday to send the articles of impeachment—abuse of power, obstruction of Congress—to the Senate, paving the way for Trump’s impeachment trial to begin.

As a result, Trump’s heavily favored impeachment odds paid out to bettors.

The 228-193 vote, mostly across party lines, comes after House Majority Speaker Nancy Pelosi delayed sending the articles nearly a month after the impeachment vote in an attempt to pressure the Republican-controlled Senate into calling witnesses against the President. It remains undecided whether witnesses will be called to testify.

House Democrats will formally march to the articles of impeachment to the Senate later this afternoon, and Senators are expected to be sworn-in on Thursday by Chief Justice John Roberts.

Senate rules declare that Trump must be summoned and given an opportunity to answer to the charges brought against him before the trial can begin, but his statement can be in written form. The impeachment trial is tentatively scheduled to begin on Tuesday, Jan. 21.

When including the Democrats’ betting odds, Joe Biden and Bernie Sanders are currently the most likely candidates to challenge Trump’s reelection bid. Biden has a slight edge at +450 odds, an 18.18% chance, but Sanders isn’t far behind at +500 odds, a 16.67% chance.

If the Democrats want to improve their chances of beating Trump, then they need to call an audible—and fast—because the current playbook isn’t yielding any positive results.

In fact, quite the opposite is happening. The current strategy against Trump appears to be playing right into his hand, and at this point in time, oddsmakers and bettors are virtually the only people who won’t be a victim of hindsight in 2020.