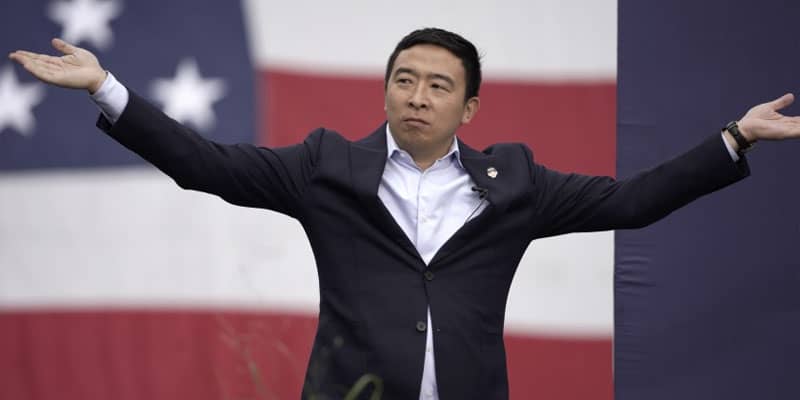 The 2020 odds for Yang (+800) currently placed him fourth among Democrats vying for the White House, and today, the once longshot candidate posted his numbers today showing that the New York entrepreneur just had the best fundraising quarter since announcing his campaign.

Yang reported on Twitter that his campaign raised a whopping $10 million from nearly 300,000 individual donors in the third-quarter fundraising alone.

His third-quarter haul far surpasses his previous fundraising efforts and nearly quadruples the $2.8 million he took in during the second-quarter—Yang’s best quarter before today’s announcement.

But the #YangGang will need to continue to grow if he wants to surpass some of the other Democrats running.

The third-quarter deadline was Oct. 1 and candidates have until Oct. 15 to make their fundraising numbers publicly available.

Of the Democratic candidates that have released their third-quarter numbers so far, Vermont Senator Bernie Sanders (+700) leads the pack with $25.3 million raised—which is also Sanders’ best quarter to date.

South Bend Mayor Pete Buttigieg (+2000) raked in $19.1 million, but that’s a significant drop off from the $24.9 million he took in during the second quarter.

Yang comes in just behind the $11.6 million raised by California Senator Kamala Harris (+1400), which is her worst quarter since announcing her bid at the beginning of the year.

New Jersey Senator Cory Booker (+5000) released his $6 million efforts as well and currently trails all of the other Democrats who’ve announced their third-quarter numbers.

However, the candidates with the best odds to win the Democratic nomination—Massachusetts Senator Elizabeth Warren (-110) and former Vice President Joe Biden (+450)—have yet to release their third-quarter fundraising totals.

But all the Democrats will have their work cut out for them since President Donald Trump announced today that he raised a staggering $125 million in the third quarter, despite facing possible impeachment.

There’s no doubt Yang has been on a tear recently—placing fourth in both the odds and the polls—but he’ll need to continue riding the wave of momentum in order to chip away at the lead held by the Democratic favorites and the war chest his potential GOP opponent currently has on hand.