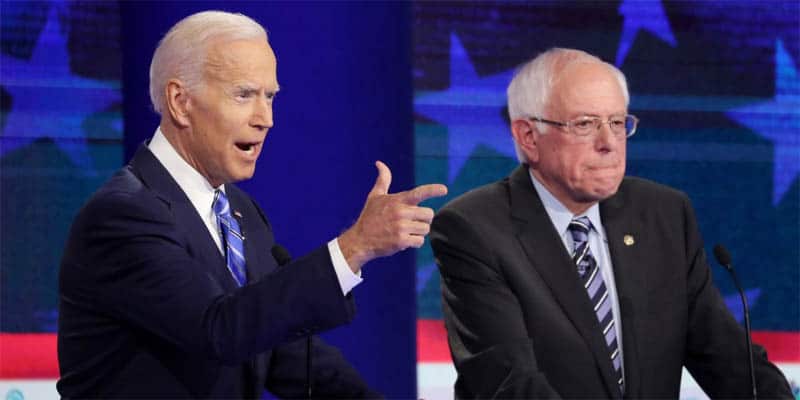 With less than two weeks before the first votes of the Democratic primary are cast, it appears the political bettors for the presidential election are still unsure who will face Donald Trump on Nov. 3, 2020.

After Sanders briefly took the top spot last week, over the weekend, Biden reclaimed his former place as the favorite to win the 2020 Democratic presidential nomination.

Here’s where the Democrats currently stand. Their odds of winning the party’s nomination from last week are included in the parentheses.

Biden’s nominee betting odds indicate he’s once again the Democratic favorite. At +175 odds ($100 bet wins $175), the Obama VP currently has a roughly 36.36% chance of facing Trump in the general election.

Despite the nominee odds for Sanders falling back into the second position, his chances of winning did not budge. Instead, they were only surpassed by the wagering action on Biden.

Sanders is still listed at +250 odds, which mirrors the 30.77% chance of winning the Democratic nomination he had before the weekend.

While Biden likely took back the top spot due to some favorable early state polls over the weekend, Sanders just received arguably his best poll results of the entire primary season.

A new CNN national poll, conducted from January 16-19, shows Sanders leading with 27% (up 7 points from December) and Biden falling to second for the first time with 24% support (down 2 points).

But at this point, Sanders has led both of those states consistently since the start of the new year, excluding a couple of polls from this weekend.

However, if Sanders manages to stay atop the odds to win both states, then his odds of winning the nomination drastically improve. If Biden takes Iowa or New Hampshire, then he may coast to the nomination.

The Iowa Democratic Caucus odds show Sanders favored to win at +125, indicating a robust 44.44% chance compared to Biden’s +175, a 36.36% probability. The rest of the field has a fair amount of catching up to do in the first primary state.

While Iowa appears to be a close race, the New Hampshire primary odds show Sanders as the heavy favorite. At -150 odds, Sanders currently has a 60% chance of winning the second state while Biden is listed at a distance second with +250 odds, a 28.57% chance.