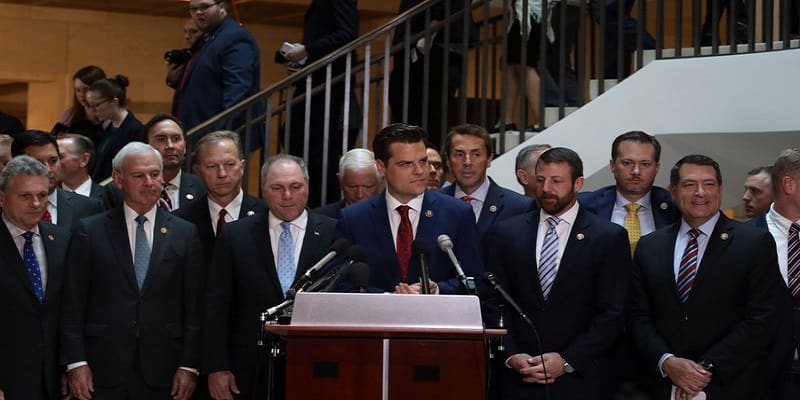 A Florida man had finally seen enough of what he couldn’t see.

And the GOP Congressional member said they can’t stop all of us. So let’s see them Trump impeachment proceedings!

“Behind those doors, they intend to overturn the results of an American presidential election,” said Gaetz during his pre-charge speech. “We’re going to try and go in there, and we’re going to try to figure out what’s going on, on behalf of the millions of Americans that we represent that want to see this Congress working for them and not obsess with attacking a president who we believe has not done anything to deserve impeachment.”

House Intelligence Committee Chairman Adam Schiff and Democrat members of Congress argue that the initial interviews for the Donald Trump impeachment inquiry must be held in private so key witnesses cannot coordinate testimonies with one another.

“As the investigation proceeds, and at a time that it will not jeopardize investigative equities, we will make the interview transcripts public,” Schiff said in a letter last week.

However, Democrats say the outburst compromised national security since some of them brought electronic devices, which are strictly forbidden in the secure area known as the Sensitive Compartmented Information Facility (SCIF).

Some House Republicans even leaked audio on social media, and all GOP members were eventually forced to turn over their cellphones.

The Defense Department also initially tried to block Cooper’s testimony, but she chose to comply with the House committee’s subpoena.

Taylor gave a nine-hour deposition where he described numerous “irregular, informal channel of U.S. policy-making” decisions from the alleged quid pro quo between the Trump administration and Ukrainian President Volodymyr Zelensky when asked to investigate Hunter Biden and any Ukrainian interference in the 2016 U.S. election.

While Trump’s 2020 odds haven’t budged in the past couple weeks, and the President remains the favorite to win reelection at this time.

However, the odds for Trump’s impeachment have been all over the place recently, and it appears the public betting market is just as confused as everyday Americans.

At -170 odds, impeachment remains likely with a 59.77% implied probability while the chances of the House not voting in favor of Trump’s impeachment are given +130 odds, 40.23% chance.

To give you an idea of the roller coaster: Trump’s impeachment odds were given a 50/50 chance following the fourth Democratic debate in Ohio a week ago, but yesterday, they hit an all-time high with -185 odds listed for “Yes.”