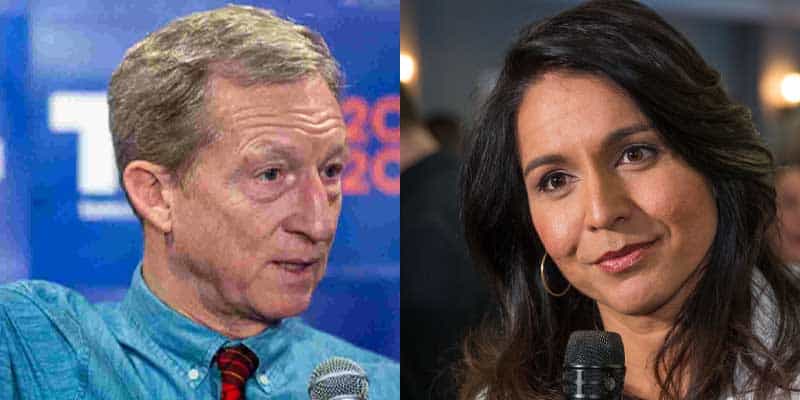 Odds Favor Tom Steyer, Tulsi Gabbard To Drop Out Next

When the first votes of a primary are cast, the path toward winning a party’s nomination becomes more narrow as it snowballs into a playoff-like system similar to sports.

Rather than competing in win-or-go-home matchups, earning as many delegates as possible is the name of the game. Early on in the process, there are only two possible outcomes from the primary state betting odds:

Because of the Iowa Caucus reporting results disaster, all of the 2020 Democratic candidates essentially got a second crack at staying alive.

But after the NH primary election results came in, the culling of candidates began as entrepreneur Andrew Yang, Colorado Sen. Michael Bennet, and former Massachusetts Gov. Deval Patrick all ended their 2020 bids for the White House within 12 hours of each other.

With the Nevada Democratic Caucus betting odds now available ahead of the Feb. 22 contest, the oddsmakers at BetOnline have introduced a political prop bet on which candidate will be the next to drop out.

Who’s The Next Candidate To Drop Out?

Businessman Tom Steyer and Hawaii Rep. Tulsi Gabbard are the co-favorites to be the next of the eight remaining Democrats to formally announce the end of their 2020 presidential campaigns.

Both Steyer and Gabbard are listed at +250 odds ($100 bet wins $250), giving each candidate a 28.57% implied probability. Neither candidate managed to reach 5% of the vote in Iowa or New Hampshire.

Based on his billionaire status alone, Steyer will most likely last longer than Gabbard since she solely relies on contributions from individual donors to fund her campaign.

While it’s worth noting that there haven’t been any SC polls released since voting began on Feb. 3, there’s strong possibility Steyer believes a strong showing in the Palmetto State could swing momentum in his favor ahead of Super Tuesday.

With Gabbard focusing on South Carolina, it appears neither will drop out after the Nevada Caucuses.

Elizabeth Warren is the third most likely to end her bid with +400 odds, giving Massachusetts Senator a roughly 20% chance to be the next candidate to call it quits.

A bet on Warren at +400 may hold some value. She did receive a handful of delegates from her third-place finish in Iowa, but a goose egg after finishing fourth in New Hampshire raises some red flags for her chances going forward.

When looking at pre-vote polling for the upcoming states, Warren clings to third in Nevada (11.5%) and fourth in South Carolina (9.5%).

With Steyer (10%) and Buttigieg (7%) nipping on her heels in Nevada, there’s a reasonable chance she finishes fifth in the next state. If that happens, Warren’s chances of ending her bid are significantly higher than the 20% implied by the sportsbook.

The latest Democratic presidential nominee betting odds are a reversed mirror of the next to drop out prop bet. Vermont Sen. Bernie Sanders currently has the best chance of receiving the nomination with +140 odds, 41.67% chance, followed by former New York City Mayor Mike Bloomberg at +275 odds, 26.67% chance.