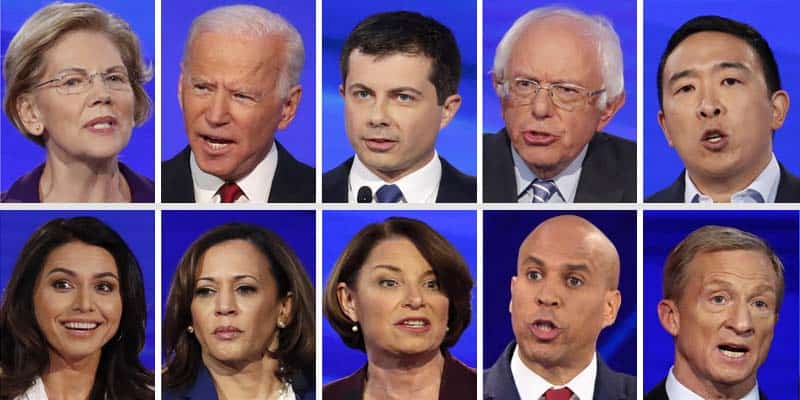 If the latest betting odds for the 2020 Democratic nomination are any indication, the race to win the party’s primary vote has never been tighter.

A major shift has occurred at the top of the board, and two candidates are now listed as co-favorites prior to the fifth Democratic presidential debate.

Elizabeth Warren, who had been alone at the top of the board for months, is now joined by Joe Biden for the best odds of becoming the next Democratic nominee.

Odds For Candidates Not On Stage

Warren and Biden are both listed with +275 odds ($100 bet wins $275), which means the BetOnline oddsmakers believe they have approximately a 26.67% chance of winning the Democratic primary after converting their betting odds to an implied probability.

In the weeks since she first released the plan pay for Medicare For All, her odds and poll numbers have consistently fallen, leading us to wonder whether Warren was in for a long, cold winter.

Seeing political betting sites decrease her odds and increase the former Vice President’s chances doesn’t come as too much of a surprise.

Just yesterday, we noted how there was significant value on Biden’s odds, especially when you consider his strong polling numbers in South Carolina and nationwide.

However, it seems both the oddsmakers and the 2020 political betting market are having a tough time assessing the value for Bernie Sanders and Pete Buttigieg—both candidates have been on a bit of a rollercoaster.

Buttigieg has skyrocketed to a big lead in recent Iowa polls, but the recent reports of his campaign’s tactics make it hard to imagine seeing him cross the finish line.

On the other hand, Sanders’ fluctuation in the odds stems from so much variation in his polls numbers.

It’s hard for the public market to pin down a candidate’s chances when they poll in first or second one week and then in third or fourth in a different poll the next week. However, after Biden, Sanders has arguably the most value on the board thanks to a strong dedicate voter base and the most cash on hand of any candidate.

Entrepreneur Andrew Yang is now listed at +1100 odds, an 8.33% chance, which is the first time he’s fallen since soared up the board at the start of the year. It’s only a slight dip, but he needs to find a way to get his poll numbers close to those in the top four.

Outside of Tulsi Gabbard, who could be a dark horse in the race, the remaining candidates are seeing their campaigns on life support at the moment and will need to have a “moment” on the stage to turn things around.

Ten candidates will take the stage tonight in Atlanta, Georgia for the fifth Democratic presidential debate. MSNBC and The Washington Post will moderate the debate, which is scheduled to last hours from 9 pm to 11 pm ET.

Prop bets for the fifth debate are also now available, which includes mentions, talk time, Trump, tweets, and all the odds you’ve come to expect from since the debates began in June.