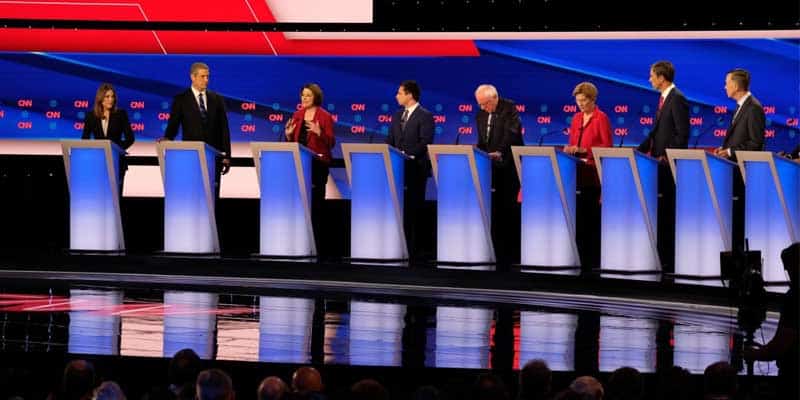 Two nights or not two nights; that is the question.

As the deadline looms to qualify for the third Democratic debate in Houston, Texas, half the field is not expected to make the cut. If no others qualify, the ten current 2020 Democratic candidates will share one stage on September 12.

Candidates have until 11:59 p.m. ET tonight to reach the thresholds set by the Democratic National Committee of 130,000 unique donors and 2% support in four qualifying polls. If the candidate cannot reach the requirements, they will not be on stage in September.

The ten candidates to qualify for the third Democratic debate, along with their odds to win the party’s nomination, are as follows:

For the most part, these ten candidates are the Democratic Party’s leaders, based on Bovada’s odds. However, there are a couple of candidates, particularly billionaire Tom Steyer and Rep. Tulsi Gabbard, that have a chance to win the Democratic nomination but have not yet qualified for the third debate.

Steyer (+10000), who didn’t start his presidential campaign until July, has already met the donor requirement and is only one poll away from meeting both thresholds to qualify for the third debate.

Gabbard, whose +4000 odds to win the nomination is better than multiple other debate qualifiers, only has 2% support in two approved polls. Although she is well over the donor requirement, things are not looking too hopeful for the first Samoan to ever run for president.

Unfortunately for Steyer and Gabbard, no DNC-qualifying poll results are expected to be released today. This effectively ends their chances to reach the Houston debate stage, but there’s still time for new information to be released before the deadline.

All hope is not lost for the Democrats not making the third debate, though. The DNC previously stated that each candidate’s donor numbers and poll support will count for the fourth debate qualifications in October. Nevertheless, four Democrats have already dropped from the race since the debates started in June.

Below you’ll find a full complete list of the 2020 Democratic candidates and their odds to win the party nomination.