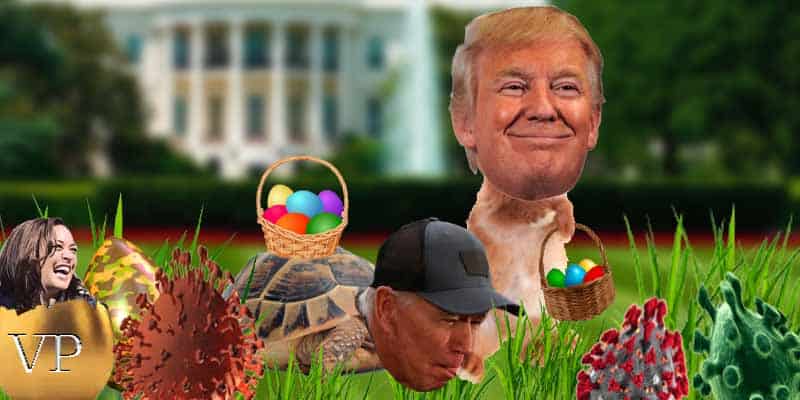 Based on the latest 2020 US presidential election betting odds at Bovada Sportsbook, an influx of public money on Trump’s line increased his probability to win re-election by roughly one percentage point over Easter Weekend. Biden, on the other hand, saw his White House chances decrease.

Although the hare (Trump) could get cocky and lose the race to the tortoise (Biden), we cover their odds and more on the latest VP pick futures from oddsmakers at top political betting sites.

With Sen. Bernie Sanders ending his campaign on April 8, the presidential matchup for the 2020 US general election will be Biden vs. Trump — where the candidate who reaches 270 electoral votes wins the White House.

Since the start of 2019, the political betting sites have, for the most part, unanimously agreed that Trump’s re-election odds should be favored for the nationwide contests this fall.

Trump even hit an all-time high with -180 odds, 60% implied probability, at political betting markets following his fourth State of the Union address at the beginning of February.

His re-election advantage then vanished by mid-March, falling to +100, 49% implied probability. Biden -105, 50%, became the first candidate favored to beat Trump on the futures board at Bovada and most sportsbooks and prediction trading markets.

Trump’s roughly six-week fall to “even odds” hit the +100 low point on March 20 as forecasts from the COVID-19 outbreak continued to look grim for both the United States and the entire world as most nations were not prepared to combat the novel viral disease.

Bettors didn’t ride with Biden very long, and the former VP only stayed on top for a total of one weekend before Trump was reinstalled as the odds-on favorite to win back the White House.

After Easter Sunday, Trump -125 has a 55% implied probability, with the bookmaker’s vigorish (or juice) removed. Betting example: A $125 bet on the incumbent Republican would pay out an additional $100 if Trump wins the presidency on Election Day 2020.

With the stock market beginning to recover, investors predict the stay at home orders, and the stimulus package will help curb the spread and return economic growth to normal sooner than initial projections indicated.

Trump’s favored 2020 election odds at betting markets, much like the US economy itself, is shaky at this time. This is primarily due to the President continuing to tease re-opening brick-and-mortar establishments. In essence, a move virtually every health and science expert strongly advises against until the number of infected spread rate sees the curve flatten.

But if the current POTUS is a shaky bet, then wagering any money on Biden is liking your chances of finding a camouflaged Easter egg during a hunt in the Amazon (the rainforest or a warehouse by Jeff Bezos).

Biden is now an official member of the quarantine podcasting party, but his campaign’s official website description for the daily podcast needs some work:

“On ‘Here’s The Deal,’ former Vice President Joe Biden provides a voice of clarity during uncertain times. Each episode will feature in-depth conversations about pressing issues with some of the nation’s top experts — paired with the heart, compassion, and wisdom only Joe can deliver.”

Look, fa(c)t. The fact of the matter is that if a lying dog-faced pony soldier bets on Biden’s odds, +125, and a 44% chance to win, then there’s an astronomically high chance the wager will return only malarkey and no money.

On the flip side: The former VP’s betting line does offer a better return on investment, indicating a $100 would win an additional $125.

Just remember (because Biden can’t): A wager on him must survive the pending all-out ad assault from the Trump campaign. The 2020 Democrats never challenged his mental stability, and you can bet the President’s Meme War Room staff will show no mercy after drawing first blood last week.

After "Biden vs Trump" became official, the #Trump2020 campaign took a total of 1 day to draw 1st blood.

Again: Democrats can't hide #Biden2020 anymore. Both are in the ring & the gloves are off.

Outside of Trump and Biden, we still predict the combined longshot odds for potential 2020 candidates to be less than or equal to 1% at this point in the race.

As we documented on Easter Sunday, Trump had a 9% edge over Biden on Friday, but the presidential futures margin is now at 11% in favor of the incumbent.

Is Donald Trump the chosen one? TBD but after 3 days #HeIsRisen the chances of beating Joe Biden. 📈

The selection of a Vice Presidential running mate by a party nominee is traditionally made before the convention as a last-ditch effort for the candidates who survive Super Tuesday. Since Mike Pence is already the VP for the Trump administration, the GOP ticket for the 2020 election ballot is set.

Kamala Harris’ Vice President odds, +140 and 38% implied probability, are heavily favored at Bovada. A $100 wager wins $140 if the California senator is Biden’s pick for VP running mate on the 2020 Democratic ticket.

Amy Klobuchar and Gretchen Whitmer are the other two women close to the Democrat VP favorite, but the Michigan governor might be an interesting play.

Biden must win Michigan to beat Trump, and he needs to pick a woman for VP (or else). Because both of those boxes must be checked, the VP pick odds for Whitmer, +400 and 18% chance, appear to be massively undervalued.

An example $100 bet would win $400 if Whitmer is Biden’s VP. Oddsmakers must not be listening to the former VP’s podcast or read the news because Biden’s definitely cuddling up to the gov’na.

Harris should be favored to be the nominee’s running mate on the Democratic ticket, the establishment could very well see the appeal of Whitmer, especially when we just laid out a detailed blueprint for them.

Like political bettors, both parties have a lot riding on the election. Whether Harris or Whitmer is Biden’s pick for VP  — and the pundit’s Golden Egg for the winning ticket — remains to be seen, but you can find the full board for updated 2020 Democrat VP odds below.

*How the bet is graded: The first Vice Presidential running mate selected by the candidate to accept the 2020 Democratic Party presidential nomination will be declared the winner.