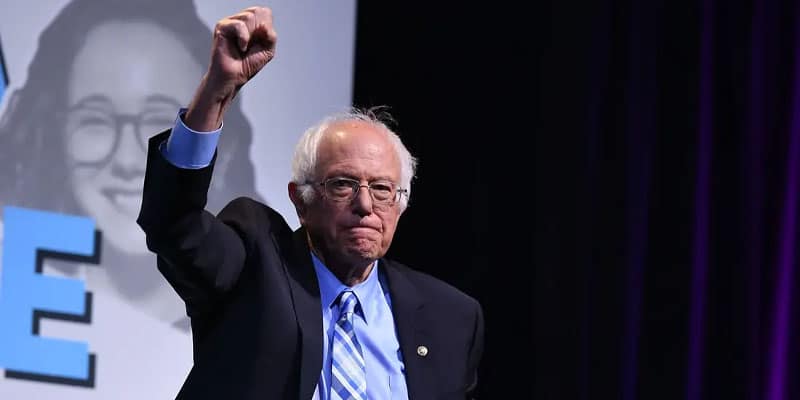 With the first votes of the 2020 Democratic presidential primary set to be cast on Feb. 3, it appears no one can stop the surge from Sanders.

Bernie’s betting odds are currently listed at +175 ($100 bet wins $175), meaning the Senator has approximately a 36.36% chance of receiving enough delegates to become the 2020 Democratic presidential nominee.

For comparison, the betting odds for Biden are now +200, giving the former VP to President Barack Obama a roughly 33.33% chance of winning the party’s nomination.

Here’s a look at the odds of becoming the nominee for all of the announced Democratic presidential candidates.

You bet he can, but it isn’t quite a “safe bet” just yet. It’s been a rollercoaster of a month for the two Democratic frontrunners as the 2020 presidential election betting market has had a rather difficult time pinning down which candidate is more likely to face Donald Trump in the general election.

After the cold winter gave Elizabeth Warren the cold shoulder at the beginning of December, Biden remained the Democratic favorite until Sanders overtook him for the first time in the middle of January.

Even though Sanders’ chances didn’t fall, Biden regained the top spot last week. However, his lead was short-lived with Sanders surging again, returning as the Democratic nominee favorite over the weekend.

Sanders hit a new high of +150 odds on Monday, giving him roughly a 40% chance of becoming the Democratic nominee. Biden was listed at +190, a 34.48% probability, in the same posting.

Both candidates slipped just a little midway through this week, but it’s likely because the oddsmakers posted both with a bit too much value and readjusted accordingly.

Whether Sanders or Biden wins the Democratic nomination comes down to one vital question.

Every candidate—from both political parties—who’s won both the Iowa Caucus and New Hampshire primary has gone on to win their party’s nomination.

According to the polling average at RealClearPolitics, Sanders currently has a 3.2 percentage point lead over Biden in Iowa and holds a massive 8.0 percentage point advantage in New Hampshire.

As a result of the strong polling in the two early states, Sanders is currently heavily favored to win both.

For the Iowa Caucus betting odds, Sanders is listed at -200. When converted to an implied probability, we can see this gives him about a 66.67% chance of coming out on top in the first state. Biden is the next closest candidate at +300, giving him a roughly 25% chance.

And it only gets better for the Bernie Bros and Sanders Sistas from there. According to the New Hampshire primary election odds, the Vermont Senator is listed at -400, which gives him a whopping 80% chance of winning the second primary state. Biden is the only Democrat even close, and he’s listed at +500, a distant 16.67% implied chance.

One final point: The pundits conveniently keep forgetting how well Sanders performed in both states in 2016 against Hillary Clinton when he came within 0.2% (49.6% to 49.8%) of beating the eventual Democratic nominee in Iowa and managed to easily win New Hampshire (60.1% to 37.7%).

Sanders won’t receive that percentage of the vote again since there are more than two Democrats on the ballot this time around. However, it’s extremely likely currently he’s under polling in both states due to the massive difference between his 2016 and 2020 numbers.

We’ll know for sure if this is true when the Iowa Caucus kicks off the Democratic primary voting season on Monday. For now, here is the full list of odds for the two early states.