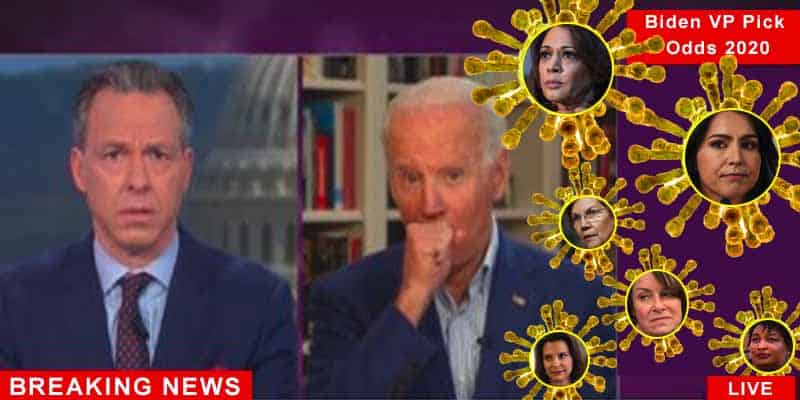 The job of Vice President of the United States, as the second-highest ranking elected official in the executive branch, can sometimes be more vital than who sits in the White House.

Succeeding the President upon death or resignation and presiding over the Senate (casting a vote only to break a tie) are the two primary constitutional duties for the VP.

A massive boost in name recognition also means the Vice President will likely run for the top spot in the future and be among the favorites considered by bettors in the presidential election odds.

Joe Biden, President Barack Obama’s VP from 2009-2017, knows all about the day-to-day responsibilities of the position. He held the job in the previous administration for eight years, but is the odds-on favorite to be Democratic nominee ready to pick his presidential running mate?

The 2020 Biden VP Pick Odds from Bovada sportsbook have numerous potential selections, but oddsmakers predict he will ultimately select one of the following fourteen women to be his running mate on the Democrat ticket.

*How the VP bet is graded: The Vice Presidential running mate selected by the first 2020 Democratic presidential candidate to accept the party’s nomination will be declared the winner.

Kamala Harris VP Favored, But Not By Much

The VP betting odds for Kamala Harris indicate she has the best chance of being picked for Biden’s running mate.

At +250, oddsmakers give her a 24% implied probability, and a $100 bet would win $250 if the California senator is the Democratic Vice President on the 2020 election ballot.

Bettors Back Whitmer Over Klobuchar

Amy Klobuchar’s odds of becoming Biden’s VP were favored and never fell outside the top two until Tuesday. The Minnesota senator is now third with +400 and has a roughly 17% chance of getting the nod. A $100 wager will return the initial bet plus $400 if Amy is Vice President.

Overtaking Klobuchar on the board are the odds for Gretchen Whitmer, the governor of Michigan — one of the three “Blue Wall” states that Donald Trump won in 2016.

Whitmer, like (almost) every state governor, is currently trying to slow the spread of the coronavirus. She didn’t initially open with Democratic VP betting odds, but the Biden 2020 campaign has confirmed she is on his shortlist for Vice President.

Currently, Whitmer is listed second to Harris at +325, which gives her about a 20% chance to be named as Biden’s running mate. If that happens, a $100 wager on Whitmer today would pay an extra $325 if she is the VP.

With a field this wide open, there are several candidates for Democratic Vice President that political bettors and prediction market traders should consider as potential Joe Biden running mates.

The VP odds for Catherine Cortez Masto (+1000, 7% implied probability) is another bet to consider, especially given Biden’s lack of support among Hispanic voters throughout the Democratic primary. Nevertheless, a $100 wager would pay out $1000 if Biden picks the Nevada senator as Vice President.

And if you believe a “longshot” woman of color will be named Biden’s Vice President, then there’s always Tulsi Gabbard’s betting odds (+5000, 1.6% implied probability).

Picking the progressive Hawaii representative could be an olive branch to the disenfranchised brothers and sisters of Bernie Sanders. Unfortunately, there’s a “slim to none” chance of something happening whenever a $100 bet pays out $5000.

Joe Biden’s odds of winning the 2020 Democratic presidential nomination has been a rollercoaster of a ride over the past two weeks. However, the former VP remains heavily favored as the nominee and will likely see his betting chances get a significant bump after his projected big win in Tuesday’s Wisconsin primary.

If all the perceived political betting favorites win, then the 2020 election matchup will be President Donald Trump and VP Mike Pence for the Republican ticket versus former VP Joe Biden and California Sen. Kamala Harris for the Democratic ticket.

Political oddsmakers at Bovada currently favor Trump-Pence to beat Biden-Harris in the 2020 general election on Tuesday, November 3, and receive 270 or more electoral college votes needed to win the White House.